What a week.
Or, I should say, what a crazy past few weeks since my last post!

There's been a lot going on. . . and a lot of nothing going on, if that makes any sense.

I did want to share about my mantle that I found at the Habitat for Humanity ReStore this weekend. It was only $35.

I will say that we forgot they only take cash or checks and we had to run to the closest ATM. So. Worth. It. 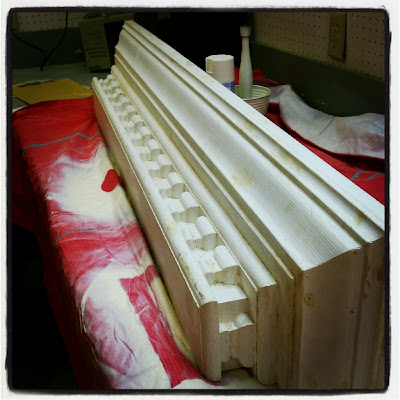 Here it is on Jeremy's workbench. Notice my well-used drop-cloth. It's a plastic tablecloth I found at Target one time on clearance for $1.

I'm planning on mounting it to the wall above our bed and using it for pictures and various knick-knacks. Yes, it will be secure enough so that it will not fall on our heads in the middle of the night and kill us.

Thank you to my boss for pointing that out.

I've been lazy (pretty much), and haven't done any of the projects I have sitting downstairs.

That could be because of the snake.

Yes, there is a snake in my house. I saw it while doing laundry the other weekend. There was only minimal freak-out followed by the thought, "Just grab him by his itty bitty neck and throw him outside! You can't let him bite the cats!"

(He really was tiny. Not worm-tiny, but tiny enough that I was pretty sure he couldn't wrap himself around my neck and strangle me. Okay, okay, he was like, MAYBE a foot long.)

But when I got back around the corner to grab him . . . he was gone.

GONE I TELL YOU!!! LOST FOREVER IN THE DARK RECESSES OF MY BASEMENT!

Needless to say, the hunt was on.

Also needless to say . . . we still haven't found him.

J is convince he's gone back outside through whatever hole or crack in came in through. Of course we're going to inspect the exterior of our house and seal any holes so he can't decide to make another visit.

So the fear of Snakey-Snake has kept me out of the basement unless absolutely necessary.

BUT with my new mantle comes the need for a trip to Lowe's for some seriously long screws & bolts, so we may as well pick up the spray paint that I also need and get two projects done and out of the way.

My trial week with the Dexcom went pretty well. It's an extremely useful tool and the day after I took it off, I felt a little lost. I also felt I had some spare time on my hands since I wasn't taking the extra steps to input all kinds of data into two separate devices.

J still wants to figure out how to play Tetris on it.

So the appeals process has been started with my insurance company. Hopefully the data I was able to gather during my week of use will enable them to make a decision in my favor. If it's going to happen, I need it to happen before the end of the year since I've already met my deductible.

It kind of struck me, the first day of use. Ok, I'm test-using this machine so that I can prove I have low blood sugars that I can't feel coming. . . yet with this machine, I can see them coming and take the appropriate steps to prevent them, thereby not having them. Which is good. . . . but doesn't prove I need the machine. It tells that I need the machine, but there's no concrete, solid evidence that shows it, you know? Maybe I wasn't going to drop that low before I started coming back up. Maybe I was going to drop lower than I'd ever been. Who knows?

It's a fitting description.

Posted by Jessica at 10:59 AM No comments: Links to this post

As a diabetic, carbs are the enemy.

Not really. My lazy, no good pancreas is my enemy.

Unfortunately, that's saying part of me is my enemy....and I'm pretty sure that's not possible. Or at the very least, kind of dumb.

Carbs are the enemy.

I used to be a serious carb addict. All my life, my best friend has been a certain snack cake queen (wow, say that three times fast!). Those ooey, gooey, chocolatey, sugary, three-bite sized treats. Pasta was sooo good too. And donuts! Oh, those sour cream donuts I used to get at the bookstore when I was at GSU. They were only .50 so of course I got two at a time. I walked around a LOT on that campus, so I needed the energy.

I loooooved diet soda too. Diet Cherry Coke and Diet Dr. Pepper were my favorite. Fresca was good when I wanted a kicky little change. But I'd drink regular Diet Coke and Diet Pepsi when we were out at restaurants. I wasn't too picky. Diet drinks are "free" in the diabetes world, so I felt like I wasn't depriving myself of what everyone else had when I could get a fizzy beverage with dinner too.

That all changed in January and February of this year. I started to get serious about what I was putting in my body.

I wish I could say I was becoming more aware of my temple and wanted to honor God by using it in a better fashion. . . .but that's really not true.

I started reading about what refined sugar and artificial sweeteners do to a human body.

Needless to say, I was disgusted.

I immediately quit drinking sodas of any kind. In fact, I think there are still some store brand diet drinks under the counter in my kitchen. I may as well toss them.

(Why not give them to someone, you ask? Why in the world would I do that?? There's no one I dislike that much that I would say, "Oh, here, I was cleaning out my kitchen and came across this poison that I don't put in my body anymore and I'd like for you to have it."

So anyways. Its been water for me since February of this year, with some coffee, Zevia, and a couple glasses of unsweet iced tea here and there. Oh, and almond milk which is surprisingly delectable. The first sip was like, "Hm. . .this is different. Nutty." But now I chug the stuff. At 1 gram of carbs per CUP, it's basically a freebie, diabetes-wise. It's all about texture for me, and I think almond milk has a nice smooth texture that's close to regular milk.

I eliminated artificial sweeteners as much as possible. A couple popped up in unexpected places, but once I was aware of them, they were gone. I also severely limited my refined sugar consumption.

In the past couple of months, I've slid away from my vigilance and my hips are proving it. It started with my birthday and just went downhill from there.

Dr. Bernstein talks about the law of small numbers. (Disclaimer: I haven't made it all the way through his book. I'm still working on digesting the first few chapters. It's a lot!) The more I use my pod and aim for that elusive 100 blood sugar, the more I can see he's right.

If you're hammering a nail for a picture frame, what sense does it make to stand across the room and run full tilt towards the nail while trying to aim with your hammer? No, you stand next to it and tap slowly, only a few inches from the nailhead. Right? Right.

Fewer carbs, less insulin, less room for error. So that's what I'm going to try and get back to. Along with adding more veggies to our diet.

I also picked up some fresh green beans, lettuce, tomatoes, cucumbers, blueberries, olives, and avocados. I guess you can say we're going to go partial Paleo. I'm not quite ready to give up all the cheese we eat, but I'm fully ready to give up pasta and grains. I've been buying bread without HFCS, but it's still a lot of carbs for me to be eating in one sitting. The only other thing I can think of (when we don't have leftovers from dinner) to use for lunches is lettuce wraps. Worth a try.

I hope I can find enough variety for our meals to keep me interested for at least a couple weeks so I can truly give this a shot. I've proven to myself that I have the willpower. I came home a few weeks ago and thought, "Wow, an ice cold fizzy drink would taste pretty good right now." I didn't have any around, so it was easy to avoid the temptation then. But the next morning, driving to work, passing QT where the soda fountain called my name. . . ? Not quite as easy, but I still did it.

I'm really not even a fan of the Zevia anymore. It just doesn't taste good to me.

So here goes everything. We'll see what happens.

Posted by Jessica at 12:37 PM No comments: Links to this post