Growing up, during the holidays my mom would put a small pan on the stove, fill it with water, and throw in cinnamon sticks, whole cloves, and whatever else she had around. It would simmer on a back burner for hours and kill whatever lingering daily odors were around.

So when the hubs and I had our first Christmas in our house last year, I was excited to do this myself. I used a small red pan that had been passed down to me from my grandmother, sliced an orange, added cinnamon sticks and cloves, and let it simmer for several hours. It fills our small home with its scent of warmth and holiday cheer.

The key to doing this successfully is not being so busy that you forget about leaving the stove on--you have to add more water every hour or so (depending on how large your pan is).

While I cannot remember burning this concoction last year at all, this year I have burned it TWICE now. My happy little red pan has been soaking for two days and is still scorched on the bottom. I think it was the orange slice. . . .And trust me, scorched orange slices do not smell good at. all.

A couple weeks ago I read a short blog post (I'm so sorry I can't remember who it was, but I think it was on Pinterest somewhere!!) about using the mini crockpot that sometimes comes with your larger crockpot.

One of those "Why didn't I think of that??" moments.

I'd also read an article about the many benefits of ginger for both personal use and around the home.

Now, finally, my house smells great and is not at risk for burning down. . .

Here's what I've come up with: 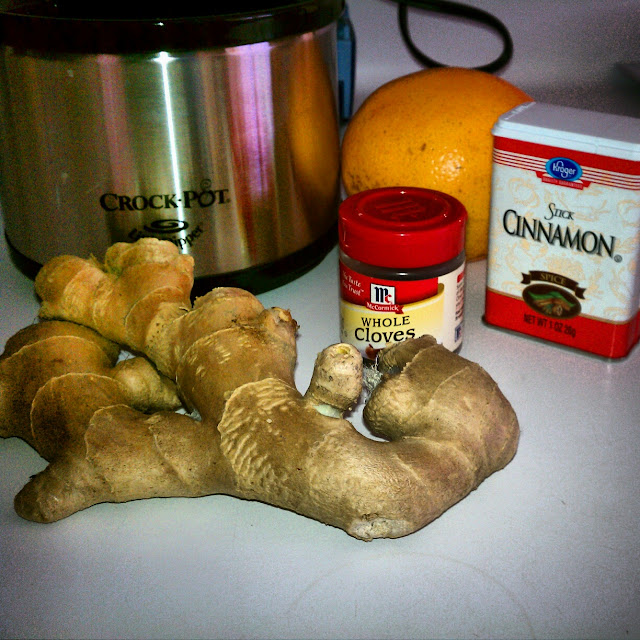 I use a small knife to cut thin slices off the ginger--maybe about 4 or 5--then fill my little crock to about 1 inch from the top and add 2 or 3 cinnamon sticks, 4 or 5 cloves and a thin slice or wedge of orange. Plug it in and let it do its thing!

I've had it plugged in for 2 days and have only put water in it once. Of course, I unplug it at night and cover it to keep any curious kitty noses out of it. A great smelling home that's not filled with chemicals or dangerous open flames!

Posted by Jessica at 11:04 AM No comments: Links to this post

I need some advice from the diabetes community out there.

My insurance has denied coverage of a Dexcom system for me 2x now. I've submitted all the requested paperwork, had my doctor write a letter of recommendation, and even wore a sensor for a week's trial.

They still hate me.

I know the insurance industry is completely backwards when it comes to stuff like this. I bet I could get them to give me any other expensive pill out there. And gladly. But when it comes to an amazing machine like the Dex? Nah....she doesn't need it. She just needs better control.

Well, you know all those patients on cholesterol medication just need better control to stop eating so much junk food.....

So I have decided to appeal again and want to write a detailed letter to them stating facts and figures as well as including some information about the less tangible side of diabetes--the emotional aspects of it. But I cannot decide where to begin.

Where would you start and what information would you include??

Happy one year anniversary to my best friend and love of my life.

Posted by Jessica at 8:14 AM 2 comments: Links to this post